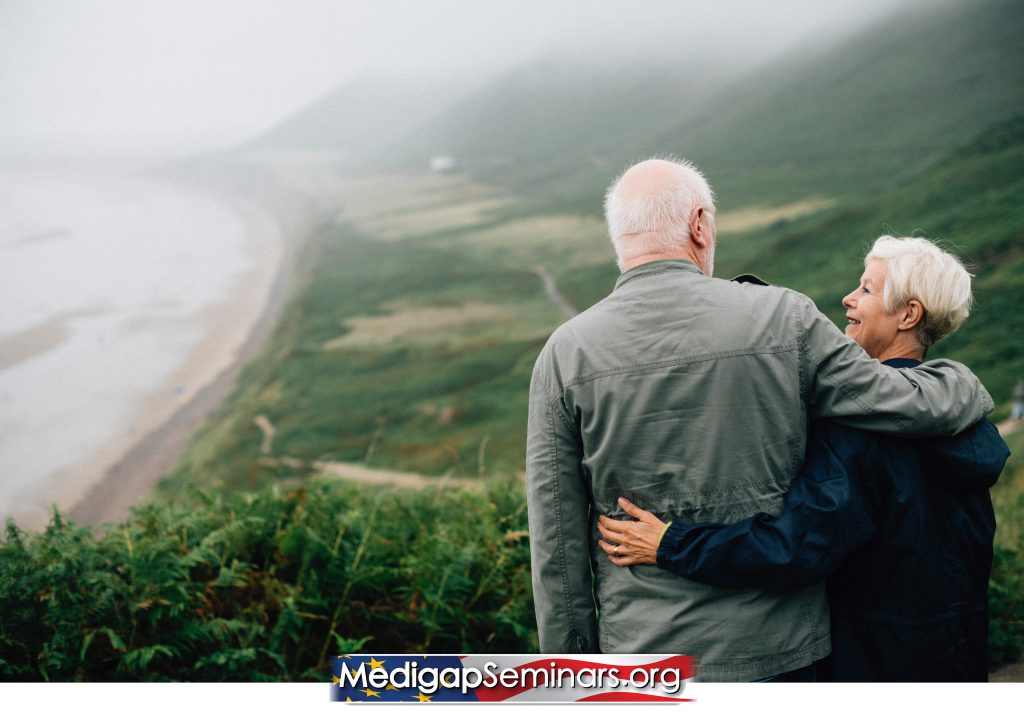 In Medicare, IRMAA is an acronym for Income Related Monthly Adjustment Amount. IRMAA is a surcharge added to the standard Medicare Part B and Part D premiums. The IRMAA monthly charge is an extra premium charged to higher income earners for their Medicare Part B (outpatient) and Part D (prescription drug) coverage.

IRMAA was enacted in 2003 in order strengthen and extend the life of the Medicare program.  The standard premium for Medicare Part B only covers a fraction of the actual cost of the program.  For example, according to usafacts.org, the total cost of Part B in 2021 was $7,575 per year, per recipient.  This breaks down to $631.25 per month for  each Medicare Part B recipient.  However, the standard monthly premium for Medicare Part B is just $170.10 per month.  The difference is paid for by taxpayers, funded from general revenues.

The 2002 Medicare Modernization Act set-up the IRMAA requirements so that those individuals with higher incomes can pay a greater percentage of their full Medicare costs. It does not impact your medical insurance benefits, just your plan premium.

For a look at the cost of Medicare without IRMAA, we have a brief article that can answer the question, how much does Medicare cost?

It may be confusing, but your first Medicare premium bill from the Federal Government does not typically include the amount due from initial IRMAA determination. The Income Related Monthly Adjustment Amount is typically added to your monthly premiums a few months later. This is because it takes the Social Security Administration extra time to determine if your modified adjusted gross income is high enough to impact your Medicare Part B costs.

The Centers for Medicare & Medicaid Services (CMS) and the Social Security Administration determine your eligibility for IRMAA payments by calculating your annual Modified Adjusted Gross Income (MAGI).  This is simply your Adjusted Gross Income from your tax return with some deductions added back to your income.  The MAGI used is as of two years ago.  In other words, CMS recalculates your MAGI on a rolling two-year lookback.  CMS then informs Social Security of their determination.

Some of the deductions added back to your income to determine your MAGI include:

Your MAGI is then matched with tax filing status and income levels in the table below to determine the amount due.  For 2022 the Part B premium ranges from $170.10 per month (standard) to a high of $578.30 per month for those in the highest income bracket.

What is IRMAA? Income brackets, costs, and calculations

Income-related monthly adjustments are calculated based on adjusted gross income and may affect Medicare premium payments. Generally, Medicare adds the premium on Part D or Medicare’s prescription medications coverage if a user earns a greater amount of income. An individual will be notified of the adjustments and will be entitled to appeal. The charge is imposed by IRMAA on individuals with Medicare Part B or Part C, or both.

The impact on Medicare Part D premiums is not as substantial on a net dollar basis. But on a percentage basis of the total Part D premium, it is meaningful. 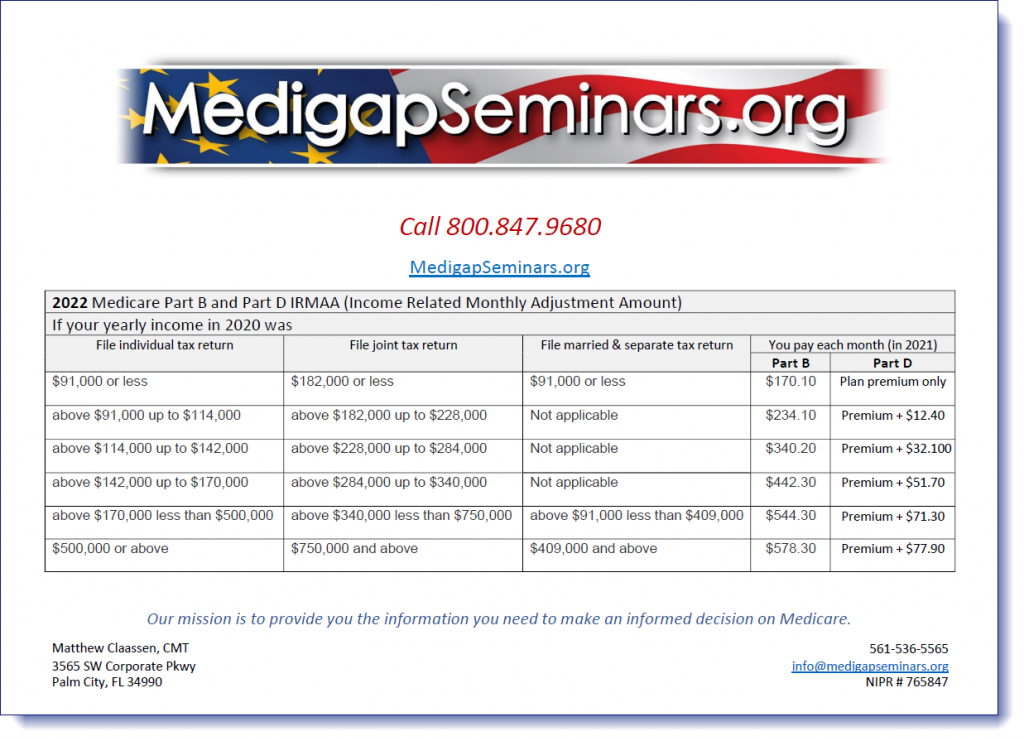 It is important to stress that your IRMAA status can change each calendar year.  This may be due to a change in your income and / or a change in the income table. Every year the Social Security Administration SSA reviews your tax return to see if you reached an income limit. Your income is matched to the IRMAA income bracket table to see if you must pay the IRMAA. They make a new initial determination and add it to the Medicare beneficiaries Part B premium and Part D monthly premium if you qualify.

Legislation enacted in 2020 linked the above IRMAA income brackets to the Consumer Price Index for Urban Consumers (CPI-U).  This is good news because it can reduce the impact of rising incomes due to higher inflation.

To be clear, the IRMAA determination amount differs by tax filing status. Medicare Beneficiaries who are married filing separately have a different level of annual income to meet than those who file individually. As your yearly income changes it can affect your IRMAA monthly premium.

Can I Avoid an IRMAA Surcharge
with Medicare Advantage Plans?

Do I Pay Extra for a Medicare Supplement?

Medicare supplement insurance is not impacted by your IRMAA status. A Medicare beneficiary will pay IRMAA monthly plan premium that increases the cost of Part B and Part D only.

How To Appeal an IRMAA
Surcharge

If it is determined that you should pay an IRMAA surcharge, you will receive an Initial Determination notice from Social Security.  The notice will include information on how to request a new initial determination.

You will want to appeal the IRMAA decision if you believe the was incorrect.
For example, if you had corrected or amended tax return resulting in a lower reported income.  Also, there are certain life-changing events that will be considered in
reevaluating your IRMAA plan premium.

To request a new determination, you will use form SSA-44 “Medicare IRMAA Life-Changing Event” or schedule an appointment at a Social Security office.

How to Avoid an IRMAA Surcharge

Of course, appealing the IRMAA plan premium bills is something you can do after-the-fact.  We encourage our clients to, where possible, avoid IRMAA surcharges in the first place. Naturally, those of us with high a enough yearly income to be impacted by the initial IRMAA determination should be grateful for what we have. But we should not pay any higher a Medicare Part B premium than we have to. A life changing event is not the only way to reduce or avoid the higher plan premium.

Below are a list of ways a person can avoid the IRMAA surcharge.

Now that you know the IRMAA calculation uses your income as of two years ago, avoid actions that will influence your income up to two years prior to starting Medicare.   For example, we often come across people who have sold a home and downsized to prepare for retirement.  That downsizing can result in a capital gain that catapults your income into the IRMAA status.  If you plan to downsize, do it early.  Downsize before the two-year window prior to
starting Medicare.

Be Careful with Roth Conversions.

Because the prevailing belief is that tax rates will increase in the future, many people are converting their traditional IRA’s to Roth IRA’s.  The benefit would be to pay the current tax rate on the distribution now so as not to pay a higher rate later.  When making that calculation, consider the
impact on your Part B premium.   You can accidentally push your Part B premium from $170 a month to nearly $600 a month.

If you are close to the next higher bracket for IRMAA costs, look at the impact of RMDs.  If an RMD will push you into a higher bracket you can use charitable contributions to lower your income.  If you don’t need the income from your RMD, your philanthropy can benefit you as well as your favorite charity.

Consider the tax advantaged income of annuities and life insurance.   Annuity income is considered in part a return of principle.  Instead of automatically taking taxable income from deferred income accounts, you can structure your portfolio towards guaranteed tax advantaged income.  The result will be a more secure income, lower taxes and possible IRMAA avoidance.

IRMAA surcharges are a frustrating but necessary feature of Medicare.
Even with the surcharges, in all but the highest level of income the consumer is sharing the cost of Medicare with the U.S. Government.  IRMAA surcharges help keep the Medicare program active and extend its life expectancy.

With planning, you may be able to avoid the IRMAA surcharge or reduce it.

Medicare does not intend to charge an IRMAA to those whose who cannot afford it.  As such, there is an appeals process to reduce or eliminate the IRMAA surcharge if a life changing event has impacted your income. 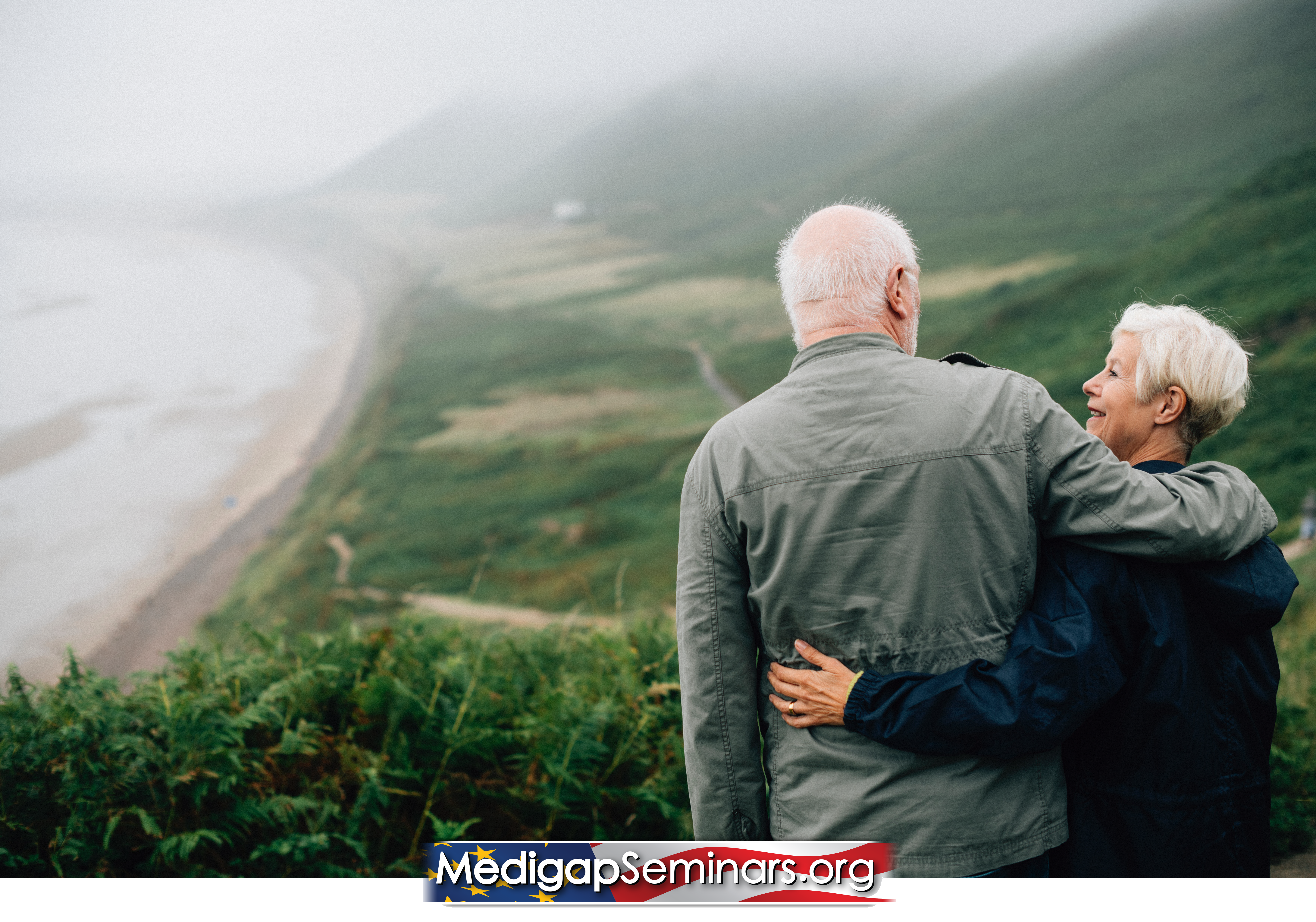 Matthew Claassen, CMT and CEO of Medigap Seminars Insurance Agency. Medigap Seminars is an award winning premier national Medicare Insurance Brokerage, ranked among the top in the U.S.A. Matthew is considered a leading national expert on Medicare and Social Security. Mr. Claassen is a distinguished member of the Forbes Business council, an invitation only organization of business leaders and entrepreneurs. He and his team have received awards from many of the countries largest insurance companies including Mutual of Omaha, Aetna, Humana, Cigna, United American, United Healthcare and others. His videos have become the most popular Medicare educational videos on YouTube with millions of views. As a financial analyst Matthew lead a team of researchers to win the 2009 Best Equity Research & Strategy Award from The Technical analysis magazine.

How can we help you?

Medicare Agent Near Me

Disclaimer: Medicare has neither reviewed nor endorsed this information. Not connected with or endorsed by the United States government or the federal Medicare program.

We’ll send you 6 email lessons with short videos that explain all the basics you need to know about Medicare. Plus BONUS New-to Medicare Checklist and Cost Worksheet to help you estimate your costs for Medicare.